skip to main | skip to sidebar

Lynn Froggett: Playing about or research? Illusion and the intersubjective third.

38 comments:
Labels: About the colloquium, References, thoughts and inspirations

The Tactical Play colloquium was a fascinating and intense day of discussions and presentations with much appreciated contributions from speakers and delegates. We will be posting video extracts of the day here on the blog soon.

If you would like to add any feedback, links, questions or ideas please do so here. 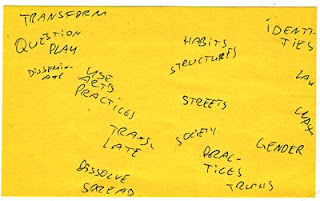 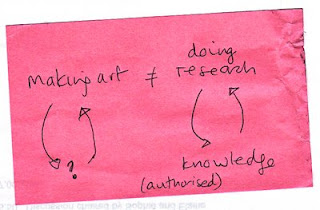 Here are a few questions that people came away from the day with:

• If ‘tactical play’ is an exercise in subversion, is it really productive? Subversion and transgression only reconfirm the established order.
• How can playful artistic practice/ research find ways to document its processes, and define its own outcomes? Why do artists talk so much sometimes?
• Where does the carnivalesque/ trickster/ fool fit?
• How serious can/must play be?
• Where has the playful subversion gone?

Please do add your own comments, questions, reflections and links by clicking on 'comments' at the end of this post. 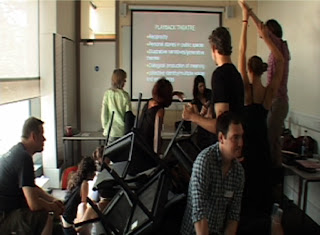 Image: Erene Kaptani leads a workshop about Playback theatre and a group exercise in representing 'power'.

Read Eleonora Schinella's report of the event on her blog: http://eleonoraschinella.wordpress.com/2009/07/04/tactical-play-conference/

Big thanks go to Kevin Mahy for documenting the event and Rebecca Maguire for helping to facilitate. Thanks also to all the speakers and delegates for their contributions and for coping with the heat and limp sandwiches.
No comments:

Happening around the same time as Tactical Play....

The Art (& Play) of Creativity

A two day workshop brought to you by MakingSpace

There is much talk…

This two day workshop is a practical investigation into the inherent nature of creativity.

Through an exploration of innovation approaches and by engaging in direct forms of art-making, in an open, art-room environment, we will make, play, reflect on and search for the intrinsic nature of creativity and seek to gain an understanding of, and insight into, ‘the creative process’.

This is a project rooted in ongoing research into the creative process, and its relationship to learning, problem-solving, organising, self-development and participation

For more information and for booking details go to www.makingspace.info

No comments:
Labels: Other events

About Lucy:
I work on the boundaries of art, design and social science. My projects include Audit (2002), published by Book Works; Pindices (2005), a collaboration with sociologist Andrew Barry shown in Making Things Public, curated by Latour and Weibel at ZKM Karlsruhe; and Rat Fair, a live event at Camden Arts Centre (2005) involving about 50 rats and 500 people. Having worked primarily in art and interaction design for several years, I am currently masquerading as a social scientist as the Clark Fellow in Design Leadership at Said Business School, University of Oxford where among other things I teach on the MBA. I think of my art work as creating bastardised methodologies, which in social science finds an intellectual home in Science and Technology Studies. More recently I've been researching the possibilities of design and art practices in organisational life, through writing and other forms of knowledge production. In 2008 I curated an interdisciplinary exhibition Imagining Business with Nina Wakeford and Alex Hodby.

Pat Kane is a musician, writer, consultant and activist. His book The Play Ethic (Macmillan 2004, and see www.theplayethic.com) has been praised by figures like Will Hutton, Charles Leadbeater, Daniel Pink and Douglas Ruskhoff. His band Hue And Cry (www.hueandcry.co.uk) have supported Madonna, U2, James Brown, and Van Morrison and Al Green, and their thirteenth album Open Soul was released in 2008. Pat writes for the Guardian and Independent, and was a founding editor of The Sunday Herald. He has consulted for organisations as diverse as Lego, Nokia, the Cabinet Office and Bartle Bogle Hegarty about the power and potential of play, and is a regular global keynote speaker on this topic.

Thought I'd add some notes on play and why I find it such an vital way of working/researching and an intriguing subject to be debating. Maybe some food for thought...

Notes, possible themes for discussion:
What's the point of playing through/with/as research? (rather than researching play).
How does play relate to 'effecting change' and how is change an imperative for (action) social research?
What are the politics of 'play'? How is this related to motivations to play as research and how is this (is this?) taken seriously as research?
Does play = 'freedom'? [adults play in their 'free-time'; small children and animals can play anytime, unless they're told off for doing so]
When is 'play' sensible and sincere?
The utility of play / taking play seriously (I've written an article that touches on this, I'll post it later)
Does play imply participation / action?
Mischief, deviance, the trickster
Staging, performing, pretending
Trespassing as play - on other disciplines, land, languages - how to create and occupy other (conceptual) places to create 'useful discomfort' (this was a phrase used by Jane Trowell, Platform recently)
What are the (irrational) rules of play?
Who plays with who? Abuse and manipulation as 'play' - e.g. Abu ghraib (power-relations of tactical play)

Notes on Huizinga:
All play is voluntary. Play cannot be denied.
He writes about the secrecy of play (masks, disguises)
Play as relaxation, escapism, instinct
Tension in play (between rules, uncertainty, chance, risk)
'Play to order is no longer play' [what does is mean to be paid to play?]
The 'spoilsport' robs play of its illusion
Play is often considered inferior to serious work - when the contrast between seriousness and play is fluid, according to Huizinga ("The inferiority of play is continually being offset by the corresponding superiority of its seriousness. PLay turns to seriousness and seriousness to play", p.8)
Repetition, order, rhythm and harmony of play

"Play is older than culture, for culture, however inadequately defined, always presupposes human society, and animals have not waited for man to teach them playing. We can safely assert, even, that human civilisation has added no essential feature to the general idea of play. Animals play just like men. We have only to watch dogs to see that ll the essentials of human play are present in their merry gambols." (p.1, Huizinga).

Johan Huizinga, 'Homo Ludens. A Study of the Play Elements in Culture' (The Beacon Press: Boston, 1950)


Other current initiatives, practices and research using play in different ways:
Probiscis: http://proboscis.org.uk/
"With play and scavenging as two essential ingredients in our work, we manoeuvre between making artworks and inventing communications tools to developing innovative software applications and building environmental sensors to crafting objects and costumes with found materials."

Rebel Clown Army: http://www.clownarmy.org/
"Roll up, roll up - ladies and gentlemen, boys and girls, friends and foes - welcome to the unparalleled, the unexpected, the perfectly paradoxical, the grotesquely beautiful, the new-fangled world of the Clandestine Insurgent Rebel Clown Army (CIRCA)."


Portable Pixel Playground - a playspace developed by folly, the digital arts organisation based in Lancaster, UK - a portable, physical digital art playground which consists of new artists' commissions: so far they have works by Squidsoup and Andy Best & Merja Puustinen. See http://www.folly.co.uk/ for more information.

To be continued... If you have any suggestions / links to add - post a comment or email sophie[at]welcomebb.org.uk
3 comments:
Labels: References, thoughts and inspirations
Older Posts Home
Subscribe to: Posts (Atom)

A one day colloquium hosted by the Birkbeck Institute for Social Research on 1st July 2009 at Birkbeck, University of London for artists and social scientists about playful enquiry as a tactic for research. The event was convened by Sophie Hope and Elaine Speight. This blog presents more information about the event, related questions, links and inspiration for 'tactical play'.